All You Need to Know Type 1 vs Type 2 Diabetes 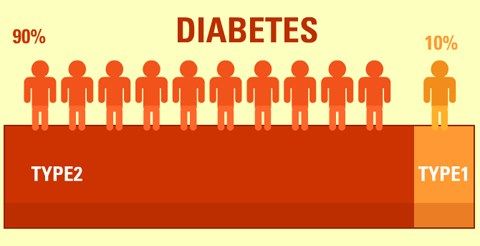 Diabetes is a dangerous and chronic condition in which the body is unable to make use of the energy from the food we eat. Diabetes is primarily of three kinds; gestational, type 1, and type 2 diabetes.

According to research, while all the kinds of diabetes vary from one another, they do have certain things in common. The sugar and carbohydrate from the food we eat are broken down into glucose which functions as the fuel for all the cells. However, for the body to absorb glucose and make use of it efficiently, the cells need a hormone in the bloodstream called insulin. In diabetes, the body fails to make a sufficient amount of insulin or is unable to use the insulin it produces. In some cases, it can be a combination of both.

The cells fail to take in the glucose because of which it continues to build up in the blood. Blood glucose in high levels can be quite damaging for the blood vessels in the nervous system, heart, eyes, or kidneys. Therefore, diabetes, if it is left untreated, can lead to blindness, nerve damage, kidney disease, heart disease, and stroke.

Coming to differences, In both type 1 and type 2 diabetes, a person has an abnormal level of blood sugar; however, the two differ in terms of the development and factors that cause diabetes.

Contrary to popular belief, the kind of diabetes a person has is often unclear. For example, people assume that if one is overweight and doesn’t inject insulin, then they have type 2 diabetes. Similarly, it is commonly believed that those diagnosed with type 1 diabetes will be underweight.

The truth is, this isn’t always the case; approximately one-fifth of people that have type 2 diabetes have a healthy weight when they are diagnosed and depend on insulin. Likewise, people diagnosed with type 1 diabetes can be overweight too.

Since both kinds of diabetes are unpredictable and varied, determining the kind of diabetes can be tricky. For instance, assuming that an overweight person with high levels of blood glucose has type 2 diabetes can be wrong since the factors that caused the said ailment might be attributable to type 1 diabetes.

Also known as insulin-dependent diabetes, type 1 diabetes generally starts off during childhood. It is an autoimmune condition which occurs when the body produces antibodies to attack its own pancreas. Since the pancreas is damaged, it doesn’t make any insulin.

Numerous factors can cause type 1 diabetes. For example, it could be because of a genetic predisposition. Similarly, it could also be because of faulty beta cells in the pancreas that are responsible for producing insulin.

Type 1 diabetes involves numerous medical risks, and most of them take place because of the damage to the blood vessels passing through the kidneys, nerves, and eyes. Plus, individuals with type 1 diabetes are also at an increased risk of stroke and heart disease.

The treatment procedure for type 1 diabetes involves the person injecting insulin into the fatty tissue through the skin. Moreover, people that have type 1 diabetes also need to make significant changes in their lifestyle including planning out their meals carefully, exercising daily, testing the levels of blood sugar frequently, and taking medicines as well as insulin on time.

The good news is that people that have type 1 diabetes can enjoy an active and long life if they monitor their blood glucose closely, follow the prescribed treatment plan, and make the necessary changes to their lifestyle.

Type 2 diabetes is considered to be the most common kind of diabetes and is the cause of 95% of the cases in adults. Previously, type 2 was used to be known as adult-onset diabetes, however, with the increasing number of overweight and obese kids these days, more teenagers are developing type 2 diabetes.

Type 2 diabetes is also known as non-insulin dependent diabetes and is a milder kind of ailment compared to type 1. However, type 2 diabetes can also lead to major health issues, primarily in the small blood vessels that pass through the eyes, nerves, and kidneys and are responsible for nourishing them. Just like type 1 diabetes, type 2 also increases the risk of stroke and heart disease.

The pancreas, in individuals with type 2 diabetes, does produce some amount of insulin; however, the amount is either insufficient to fulfill the body’s needs, or the cells are resistant to it. This resistance to insulin or the lack of sensitivity to the insulin hormone happens mostly in the muscle cells, liver, and fat.

Obese people that are over 20% of their ideal body weight according to their height are at an increased risk of becoming a victim of type 2 diabetes as well as the medical issues that come along with such an ailment. People that are obese are generally resistant to insulin which means that the pancreas must put in twice the amount of effort, at least, to produce enough amount of insulin. Regardless, the insulin is still not enough for regulating the blood sugar.

While there is no cure for diabetes, type 2 can be controlled with the help of exercise, nutrition, and weight management. However, this kind of diabetes progresses, and medicines are often required.

Medicines for type 1 and type 2 diabetes

The following are some of the medicines that can be used for effectively controlling type 1 and type 2 diabetes.

A prescription medicine, Actos is used along with exercise and diet for improving blood sugar of people diagnosed with type 2 diabetes. Moreover, Actos can also be used together with other medicines or insulin; however, it is not suitable for treating type 1 diabetes.

Glucophage XR can be used either alone or together with other medicines or insulin for treating type 2 diabetes. It is also effective for controlling blood sugar.

As mentioned above, there are differences when talking about the Type 1 vs Type 2 diabetes debate. Also, medications are available for both types which are recommended to be paired with lifestyle changes for better living.